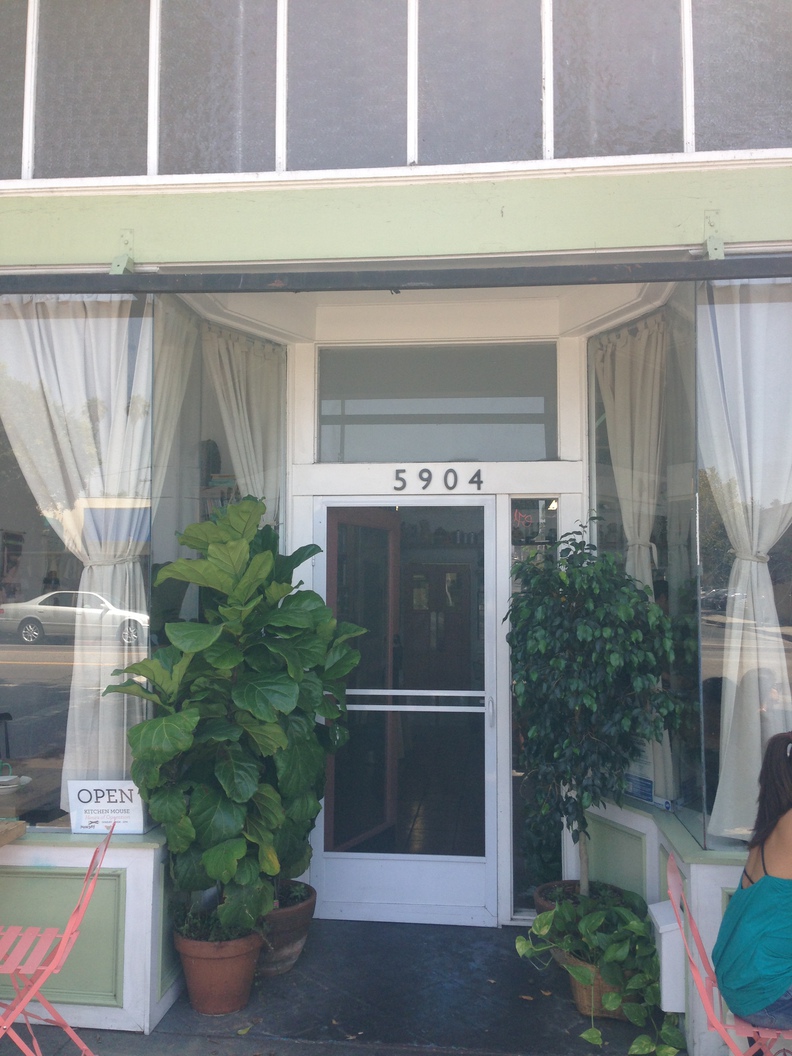 Kitchen Mouse is a little cafe-ish place in Highland Park, with a strong vegan influence. It’s relatively new, opened in May 2014, and is a prominent symbol of the growth that’s been happening in Highland Park. 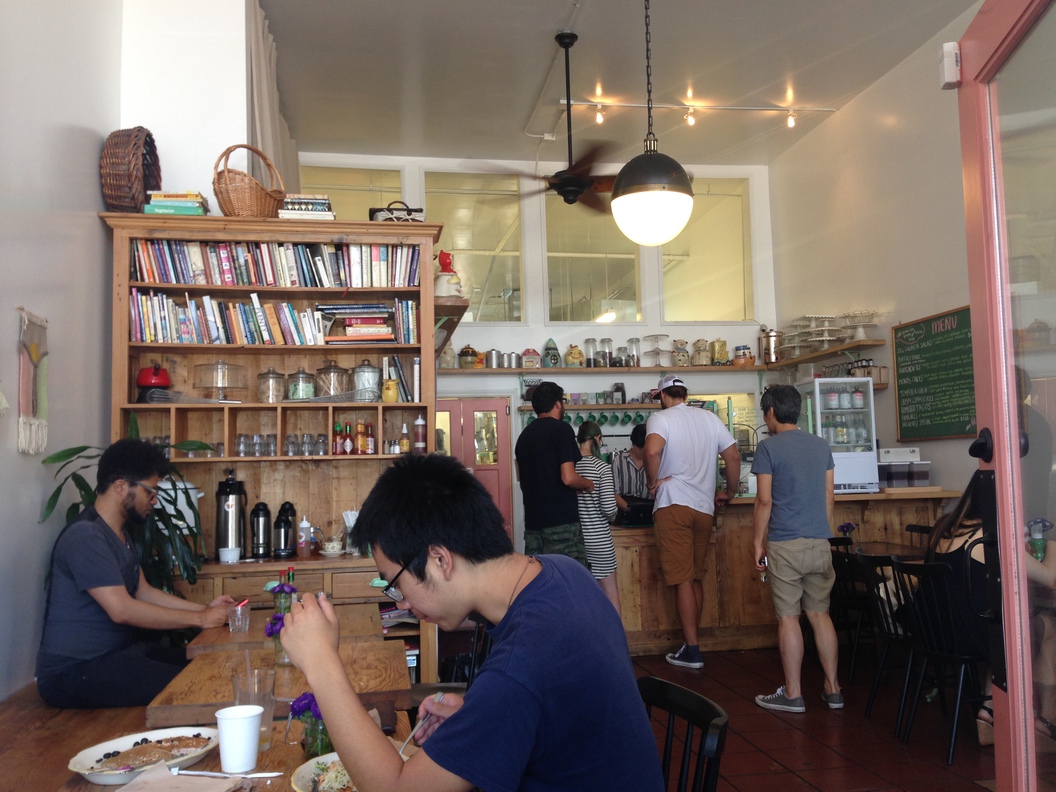 Once inside you can tell there was a lot of effort put into giving the interior a specific aesthetic. It is beautiful but I wouldn’t say necessarily unique. I’ve noticed a lot of the same themes reflected in many other newly opened restaurants in LA (Sqirl and Commissary come to mind). Basically just imagine that someone automatically generated a restaurant from all the photos in Instagram and you’ll have something vaguely resembling Kitchen Mouse. 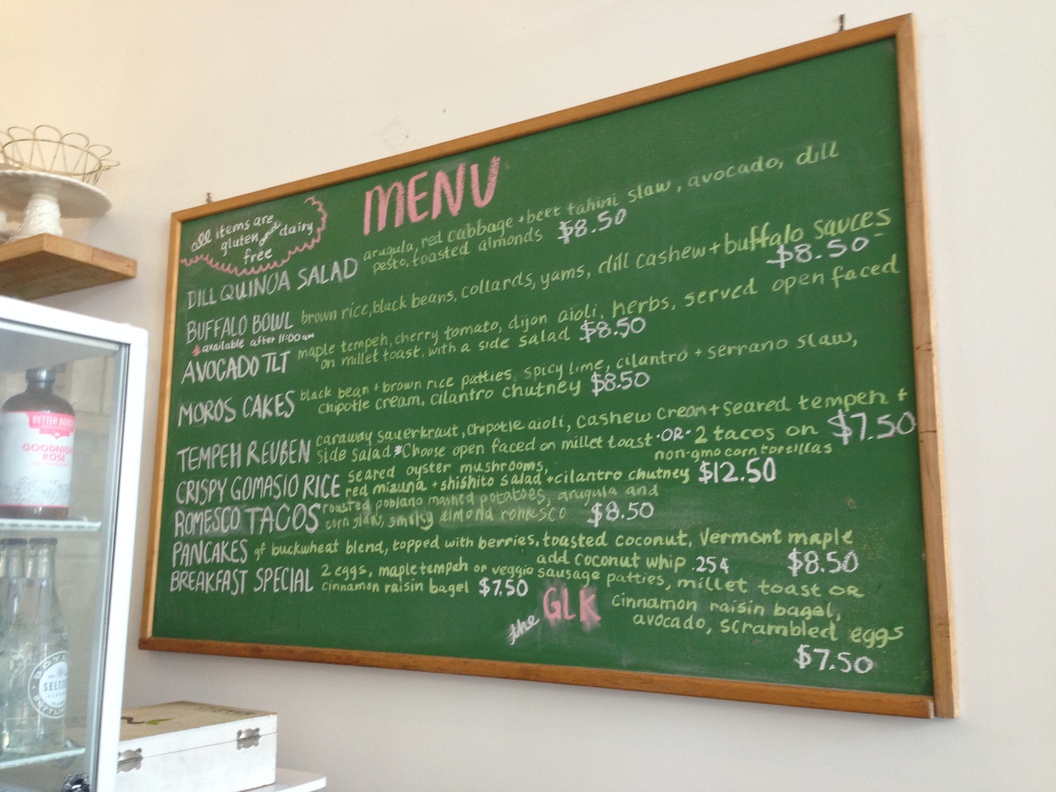 In line with the instagram-tastemaker aesthetics of the place, the menu features simple classic dishes each composed of a curated set of ingredients. Something is actually different here though… nearly everything on the menu is vegan! Their non-vegan items are isolated to their breakfast menu, in which eggs are the defining ingredient. 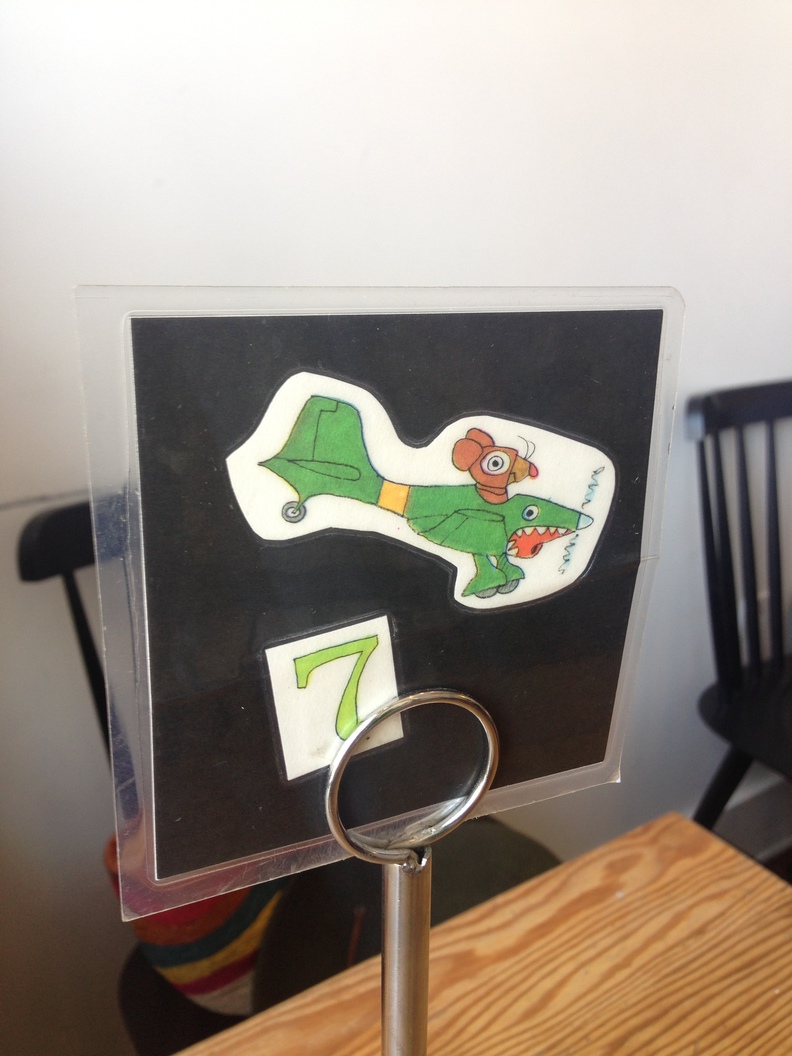 By the way, does anyone know what these things are called? Those things that casual food places give you to put on your table so the servers know who gets what. I’m just going to call it an “order flag.” 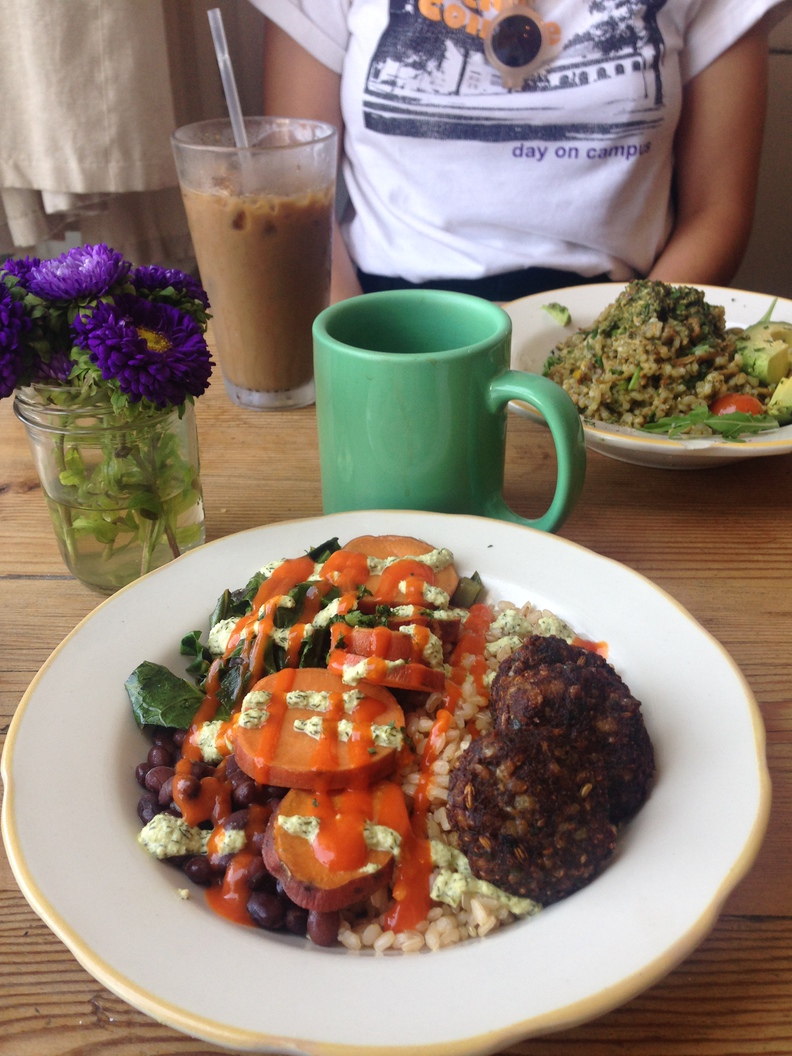 I ordered the Buffalo Bowl. What can I say? I’m a sucker for buffalo sauce. I also got the veggie patties for an extra $1. 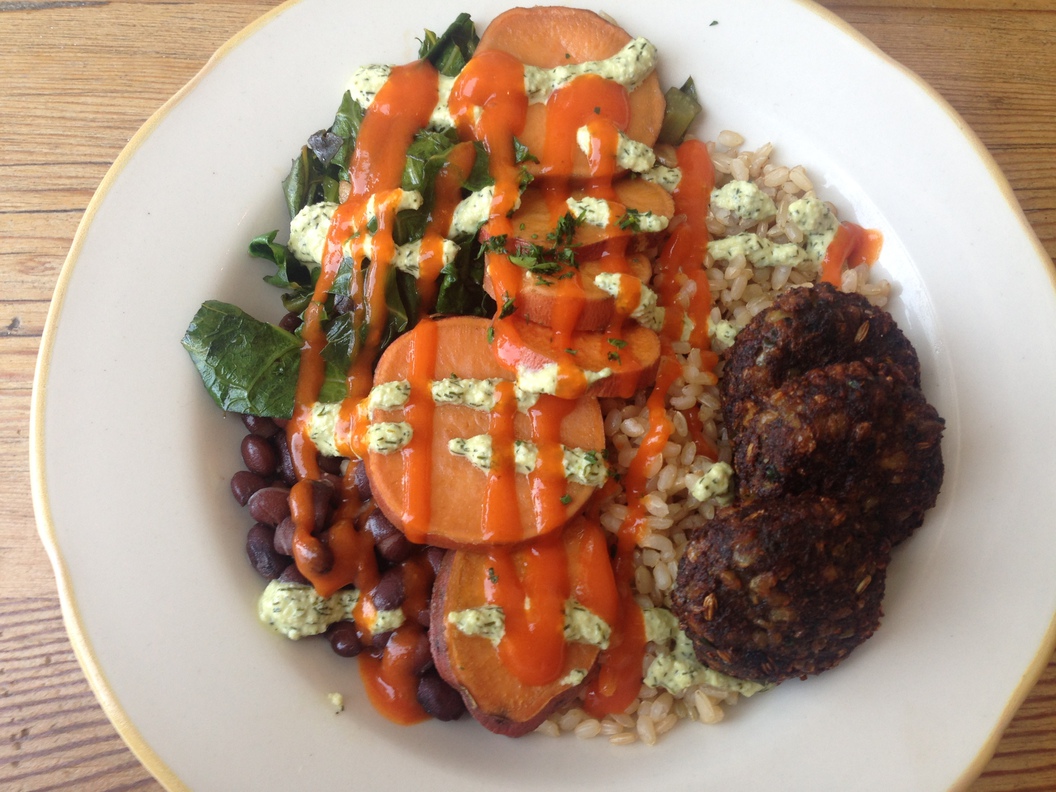 Apologies for the poor framing of this picture but I like to get up close shots. I didn’t regret ordering this in the least. Everything was fresh and seasoned just right. I only wish there was more!

As much as I want to tease Kitchen Mouse for being yet another marketing gimmick for gentrified brunch-going millienial contemporary conformists, the strong commitment to veganism really impresses me. Maybe it’s just me but I think Kitchen Mouse is a bit undercover about their veganism. Not that I have any problem with that. It would just be more proof that you can serve really good vegan cuisine that appeals to non-vegans.

Andrea heard about this vegan taco truck that parks outside this farmer’s market last Tuesday so we decided to check it out! 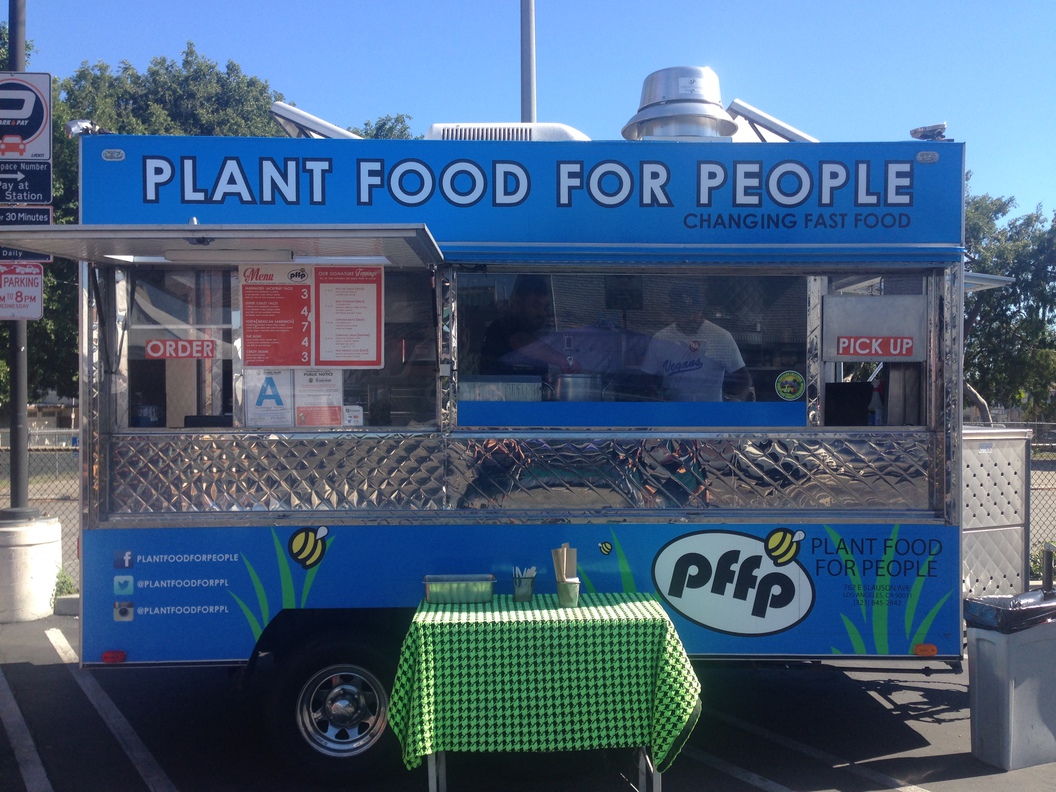 This is the PLANT FOOD FOR PEOPLE taco truck. I’ve never heard of this thing but it’s awesome. Good cheap fast food is usually not something you associate with veganism but PFFP makes it a reality. This single taco truck represents how great it is to be a vegan in LA. 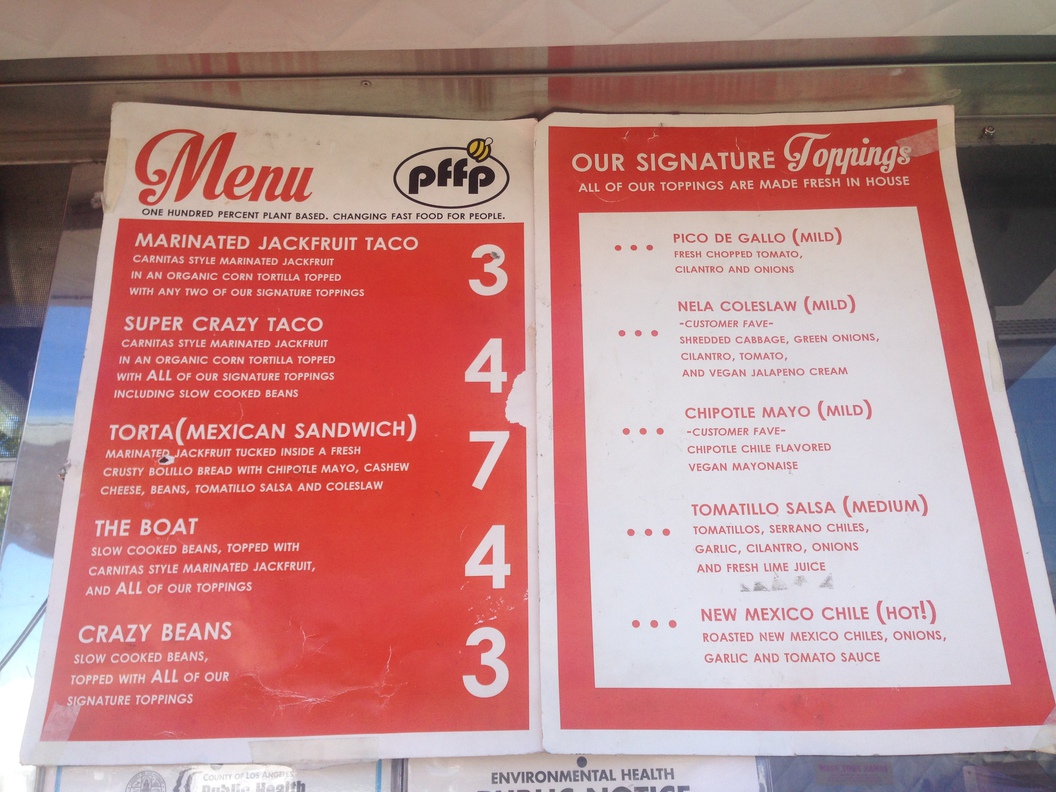 Their flagship dish is the “Marinated Jackfruit Taco.” It’s a jackfruit-based taco and it comes with two toppings of your choice. $3 is not bad at all either. We ended up ordering three of those all with pico de gallo and a sampling of the other toppings. We also got one each of the Super Crazy Taco (same thing but with all toppings), the Boat (not a taco), and Crazy Beans (also not a taco). 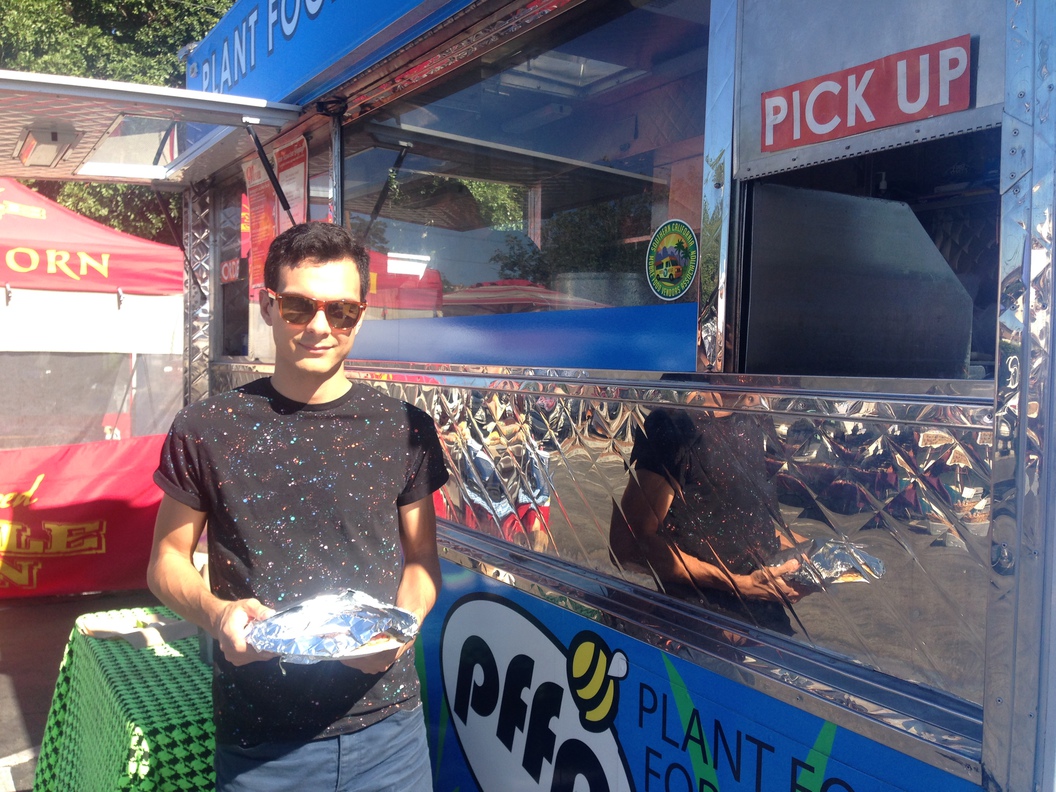 The food came out in about five minutes. Don’t be fooled by my composure, I was starving and just about ready to rip into that aluminum foil. As you can see lots of tomato, cilantro and onions. The three regular tacos are in the front-left, the Super Crazy Taco is in the far back, the Crazy Beans are in the middle, and The Boat is on the right. 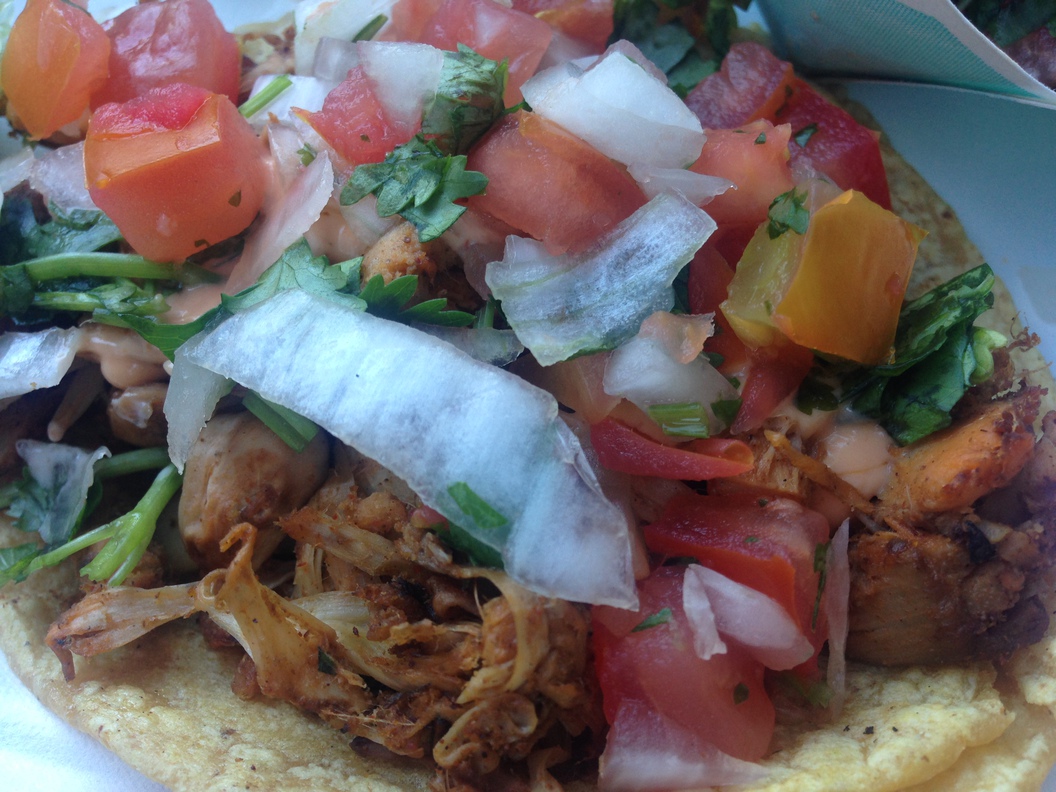 These tacos did not disappoint. Jackfruit is an entirely satisfying replacement for carne al pastor and the toppings were all very fresh. I’m also just a sucker for lime juice and cilantro. The Boat was basically a taco without the tortilla, and the Crazy Beans were a less featureful The Boat. Personally I don’t think the Super Crazy Taco was necessary, mostly because it was extremely large and unwieldy. Next time I’ll just go for two of the regular kind. 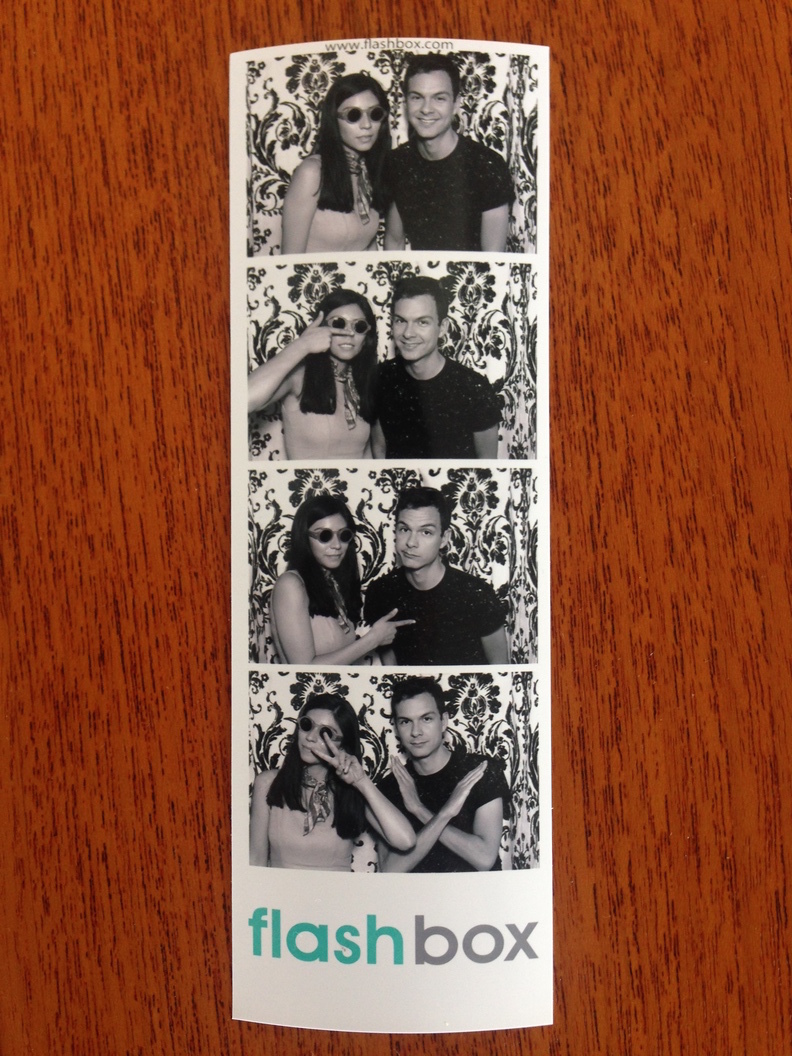 The surrounding farmer’s market was cool too. Lots of local fresh produce, antiques, and other random stuff. Good non-stupidity-inducing music was playing and the guys at Flashbox let us use their photo booth for free! Definitely check this out if you’re ever looking for a quick Tuesday getaway for lunch.

Hello people of the internet!

This is the first post of Higher Consciousness Eating. You can read all about it in the about section. Long story short, I’ll mostly be doing vegan restaurant reviews in Los Angeles. I eat out regularly and I’m constantly impressed by the vegan options available here so I thought it’d be nice to share over the internet (obviously because sharing over the internet is always a good idea).

The first restaurant we’re reviewing is Flore. Flore is a little vegan restaurant on Sunset Boulevard in Silver Lake. Even though it’s in a pretty trendy area, I don’t think many people outside the immediate neighborhood know about it. I actually just recently discovered this place after nearly a year of living on the east side. Anyway, more people should know about this place because it’s hardcore!

Just kidding, the vibe is actually pretty casual, like a cafe. Lots of lighting inside but also outside seating. Succulents and cacti everywhere! 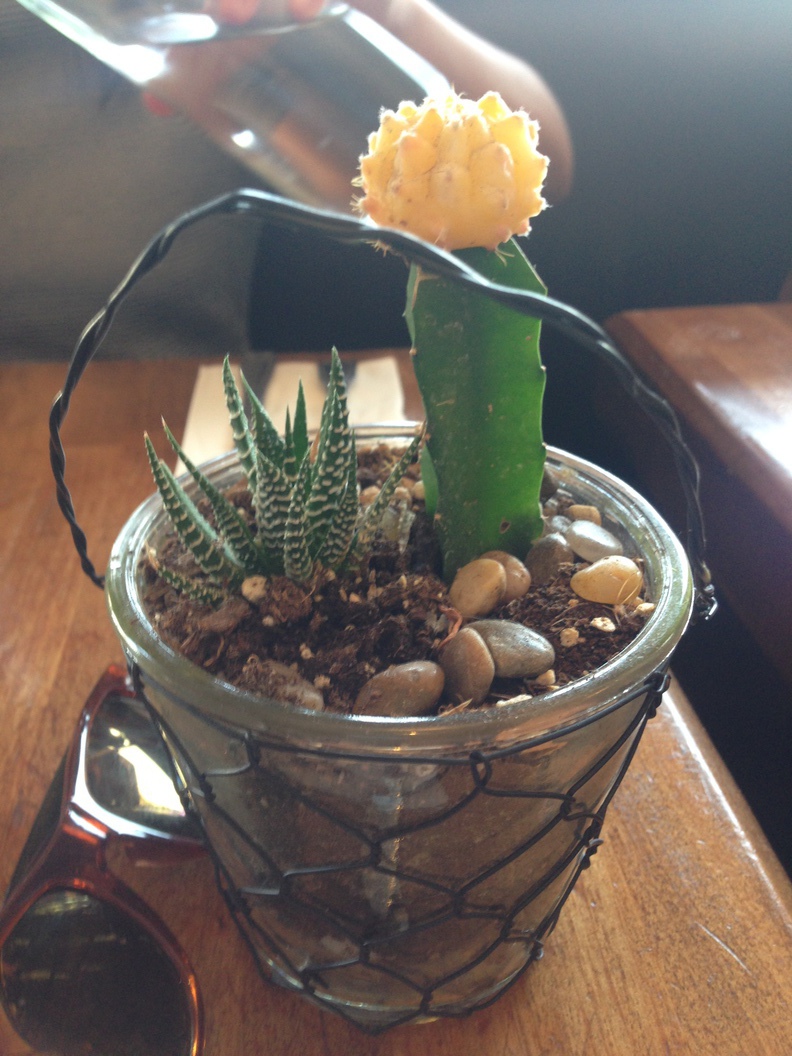 There isn’t a designated area for the host so when you walk in, you’re immediately standing amongst other people eating. There also isn’t an obvious place for you to order so on my first visit I awkwardly stood around waiting for the waiter to give me permission to sit. It’s literally like a french cafe: there is table service but you’re also expected to just seat yourself. Whatever, my point is, when you go to Flore, just seat yourself, don’t stand around like a maniac like I did. 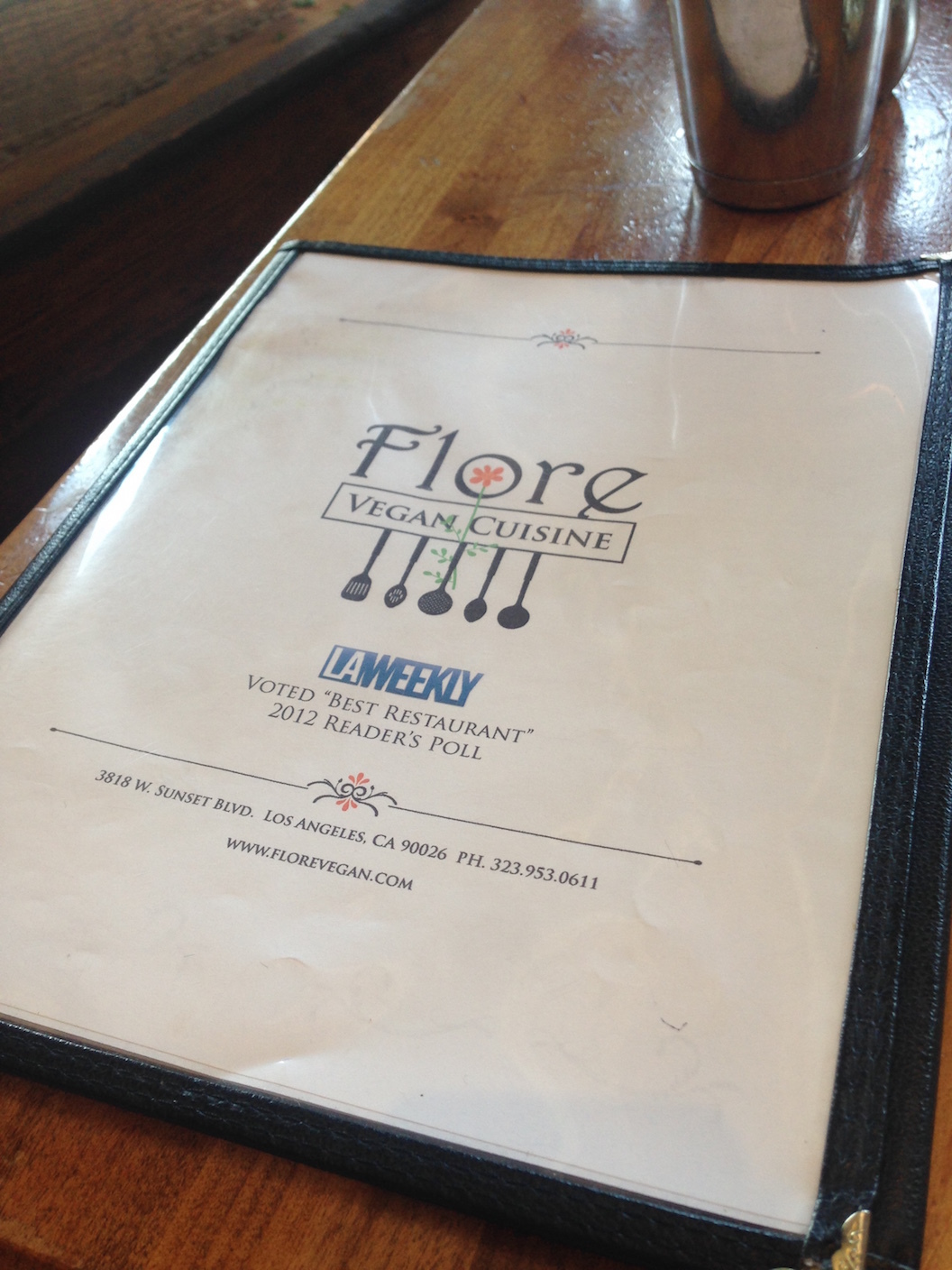 The menu has vegan takes on standard stuff like soups, salads, sandwiches, bowls, burritos, tacos, pizza, burgers. They also have a large fresh juice and smoothie selection which is always nice, much better than carbonated death potions. You’ll end up spending about $10 for lunch. 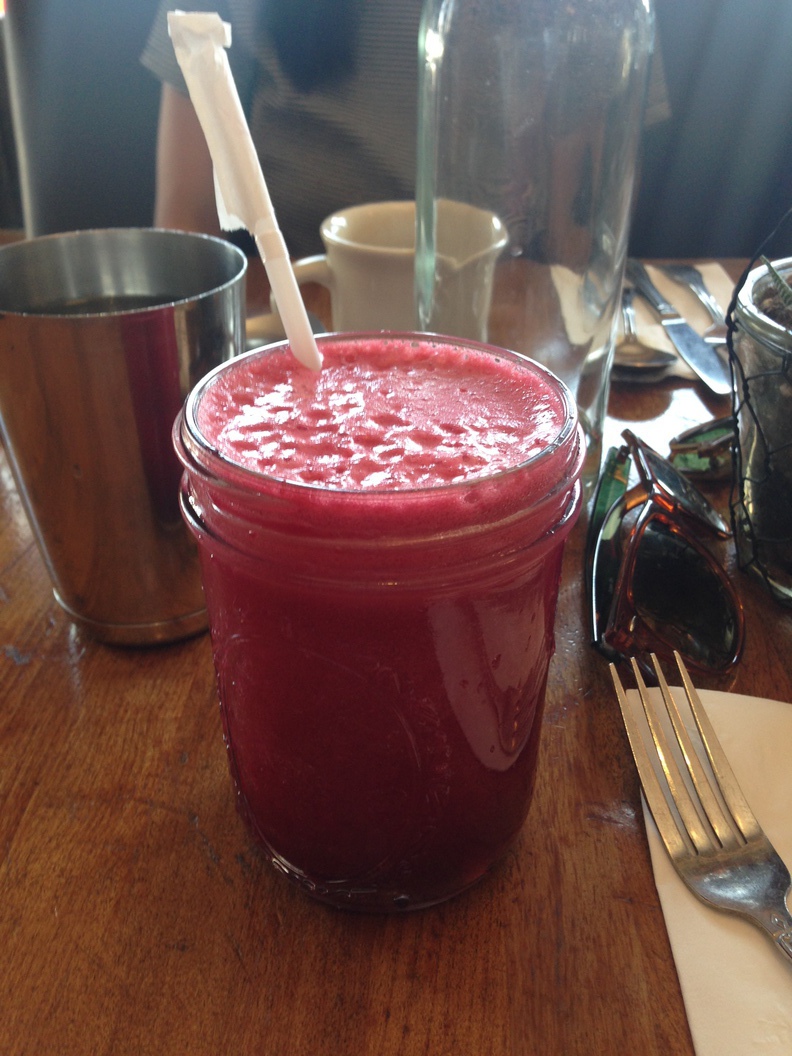 I used to be much more into juice (I just drink way more water now) and even though I’m not into it as much anymore I was feeling particularly juicy on this trip so I got the Apple Beet juice. The juice was extremely well done, not too sweet and very refreshing. Full disclosure, I love beets and you can’t go wrong with apples juice so this wasn’t unexpected but I’d guess that all of their juices would be just as good. Next time I might ask for ice, though. I’ve been obsessed with tacos lately and I hadn’t yet tried their tacos so I ordered the “Eastsider Tacos.” The dish speaks for itself though I have to admit that it wasn’t what I was expecting. It’s not that it was bad, it definitely wasn’t bad, it just didn’t really send me a “taco vibe,” telepathically or otherwise. It sent me more of a seitan vibe, like a crazy seitan vibe, and that was a bit scary but then I realized it was also kind of a lettucy-tomato vibe. There was also a tortilla vibe in there too. Not the spicy salsa vibe I’ve come to expect from tacos. 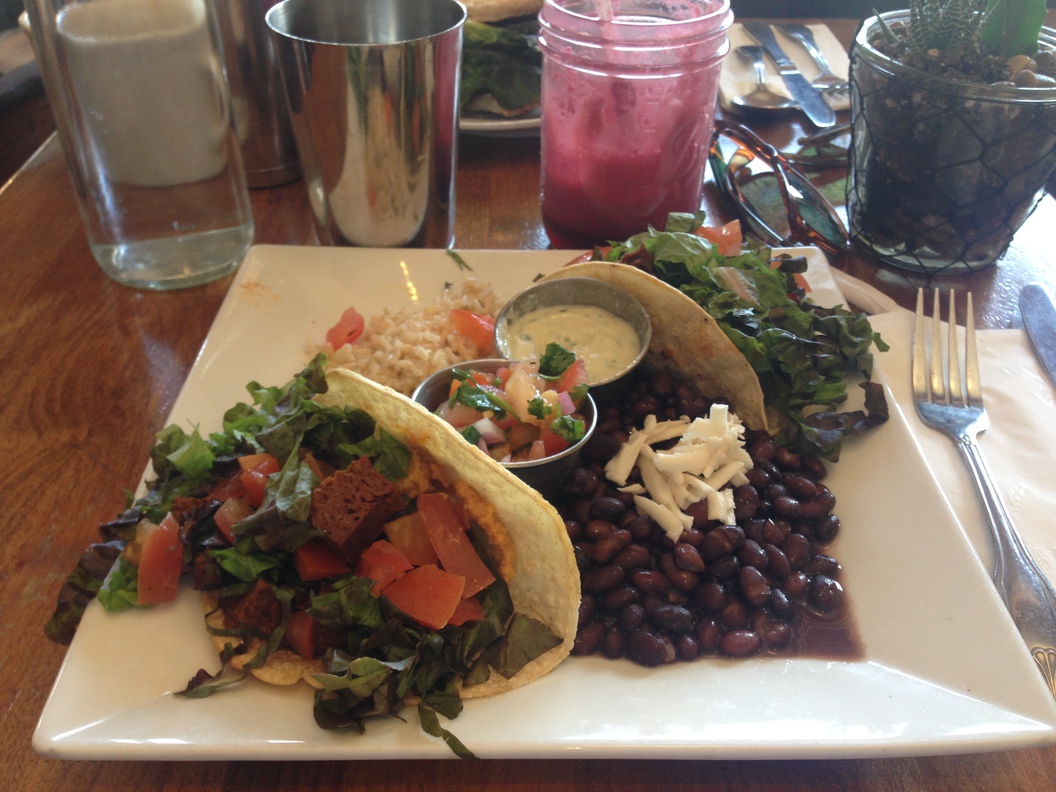 The thing about Flore is that it’s a healthy vegan place, or maybe “ingredients-oriented” is a better term. Your food will not come prepared with excessive amounts of sauces and salt and stuff. No, Flore keeps the embedded condiments to an absolute minimum and explicitly serves accompanying sauces on the side. To most people (all of whom are likely suffering from a salt addiction), the first bite might be surprising but if you understand what they’re going for you’ll appreciate it more.

This is why I like Flore. While many other vegan restaurants in LA have mastered the art of pleasing conventional tastes with vegan food (perhaps at the cost of healthiness), Flore allows you to experience the food for what it really is. Even though this might require you to manually season to your liking, you definitely will not feel gross on the trip home.